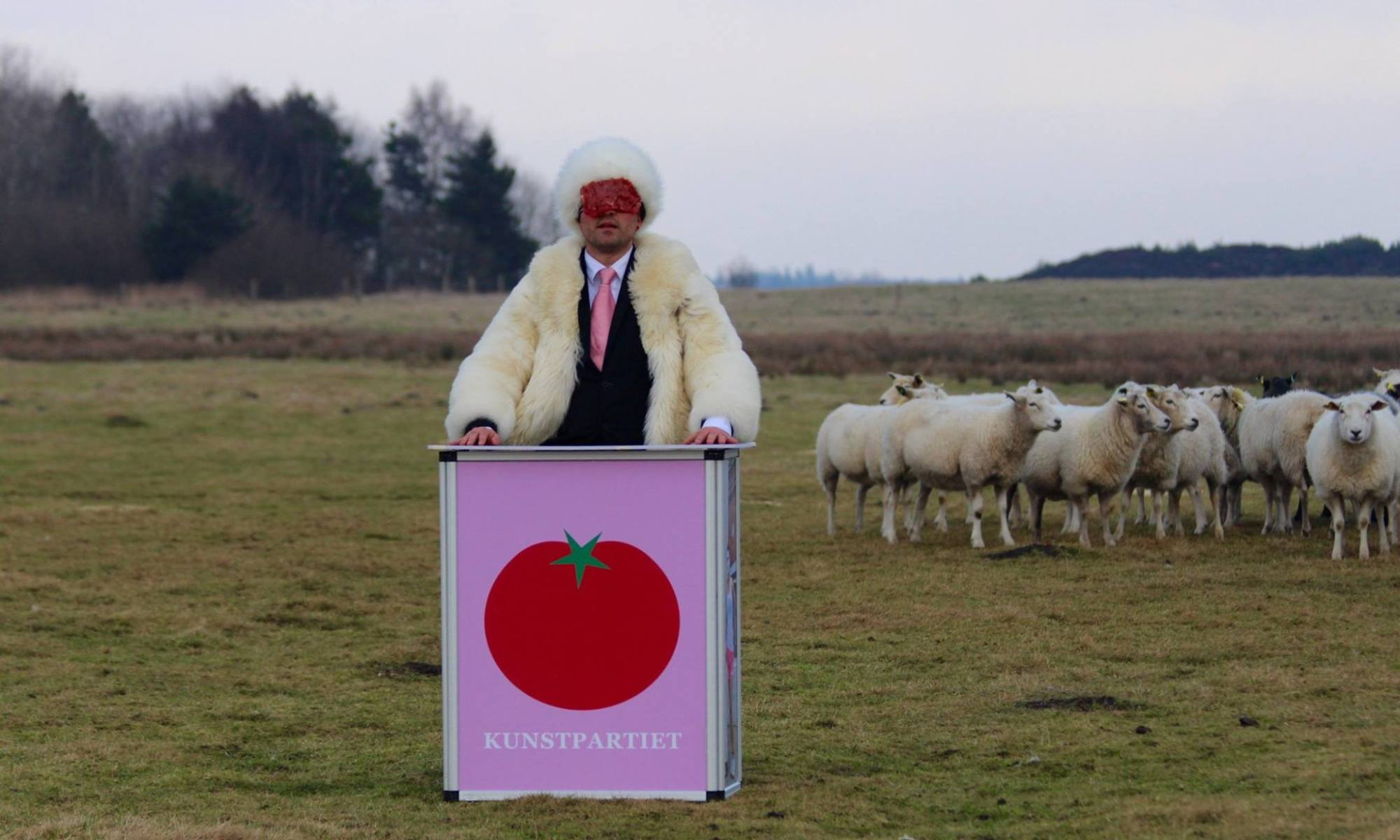 In the second year, we feel the need to conquer new territories outside of Holstebro Municipality. For this purpose, most of our activities in 2017 will take place in other cities all over in Jutland and the rest of Denmark.

In January, Kunstpartiet will make a Caravan-campaign tour with autocamper, from Hjørring Tonder, in favour of Jutland’s regional diversity. In February, we will activate the awareness of health in Silkeborg with our campaign “The Kiss” as the elixir of life, at the opening of Munch exhibition in Museum Jorn. In April, we will realize a bike-speach (from Venø to Herning). Mayor Candidate JEPPE will also visit the Art Museums of Jutland in his white limousine, to ask from each one a definition about the Beauty. After collecting the definitions signed by the museum directors, we will present them as the “Statements of Beauty” in one document, at a ceremony in Skive, in the framework of the finissage of Off Road Festival. In May, the Art Party will be resident at the Italian Cultural Institute in Copenhagen, and they will work on their experiments for a brand new form of Family Politics. In June, Jeppe and Linda will come be back to Holstebro, to face the finish of their long electoral campaign, with the support of their voters…
The big question will remain unanswered till the last moment: will Jeppe achieve to be elected as the new mayor of Holstebro? We do not know yet if the people, inspired by the tomato from the logo of Art Party, will use it for or against Jeppe…

11. HEALTH
6. – 11. February | ART BY CALLING
Awareness-raising campaign about “The Kiss”, as life elixir: in streets, markets and schools
We start in Silkeborg a new experimental campaign ‘ART BY CALLING’. We will spread good humor and activate the ‘Serotonin’ level between the people and families who want to have a visit from Jeppe and Linda. In the first consultations, we will immediately provide KISSES as ART VITAMINS, and in acute cases, we can prescribe the LONGEST KISS as ART MEDICINE. In case of art-emergency cases, we will intervene with an ambulance to bring the patient to the nearest Jorn Museum for a BIGGER KISS …

12. ENVIRONMENT
The first bike-speach in the Danish history, from Venø to Herning:
31. March – 1. April: from VENØ to STRUER
Jeppe and Linda will sleep a night in Venø and they will put their flag up on the island. The next morning they will re-open the Old Post Office, delivering postcards to citizens on the island and singing for them. Later they will make a ride on the ferry and perform for the travelers on the way to Struer. When they will arrive to the shore, they will borrow the book “Atlas Flora Danica” and prepare “cultural smoothies” to the families and they also will plant a tomato plant at the Library. After these actions, they will cycle till Herning.
1-11. April: HERNING
Art Party will be in residence in Herning in the early April 2017, to prepare the citizens for the opening of the festival OFF Road.
Amongst the different activities:
– Jeppe will participate as “Mayor Candidate” in a real city council;
– Jeppe and his “Meditation Counselor”, Govind Radhakrishnan, will make a great yoga event in the city to help the office workers to relax;
– The Mayor Candidate of Holstebro will visit the citizens of Herning in their homes
– Jeppe and Linda will spread their propaganda in the streets of Herning

Jeppe and Linda will share “Beauty” with everybody and they will perform a special intimate performance for the citizens in a Limousine (5 minutes in loup, from 1 to 4 people at a time …)
– During the Residency, they live in a shop in the pedestrian zone to show the transparency of their politics.

13. AESTHETICS
11 April – 6 May | DECLARATIONS OF BEAUTY
What is Beauty? Art Party’s main objective is to create a fundamentally aesthetic work and to pursuit of beauty in every possible way, as this is also specified in the slogan of Art Party: BEAUTY ABOVE ALL. We want to initiate a project to collect the different expressions and perceptions about the essence of the ‘Beauty’, as we believe that it could not be described by only one definition. During the project STATEMENTS OF BEAUTY, from the opening day of Off Road regional festival, the mayor candidate JEPPE will visit the Art Museums of Jutland in his white limousine, and make sign each museum’s definition about the Beauty by its director. JEPPE will arrive at the museum on the agreed date and time, and together with the museum director, they will sign the document in the car. We will also perform a special performance in front of the museums, which takes place in a Limousine, where the audience can enter in every 5 minutes. After collecting all the signatures, Jeppe and Linda will present the “Statements of Beauty” in a document at a ceremony, in the framework of the closing evnt of Off Road Festival in Skive. The first section of the Declarations has been prepared by Folke Kjems, Director of Holstebro Art Museum.

14. FAMILY POLITICS
8.- 16. Maj | NO MORE WI-FI IN BEDROOMS!
Art Party will activate a door-to-door NO-WIFI service campaign and it will give at the end a special award to the family in Copenhagen which gives birth to an artist …
a collaboration with the Italian Cultural Institute in Copenhagen

15. AGRICULTURE
10 June h. 13.30 | TOMATO DAY
Finally the time has come to throw tomatoes at Jeppe, the “Mayor Candidate of Art Party”, if he can not speak Danish! with candidates from the political parties, scouts, young people from the schools of Holstebro
Opening of Holstebro Festival at Kirkepladsen

16. PUBLICS WORKS AND HOUSING
13 June h. 10.00 | PAINT IT PINK!
Along with many children from the schools of  Holstebro, we will paint the pedestrian street in pink,
from the Old Town Hall to City Hall

17. SPORT
13, 14, 15 June h. 19.30 – 20.30 | WILDCARDS FOR VOTERS IN THE WILD WEST
A real boxmatch between Jeppe and a secret opponent. For the final verdict, should we wait for the response from the judge? Or even let the audience choose? with Tage Larsen, Jeppe and Linda, Alberto M. Guinaldo as the judge, “Jose y Linda”, Spanish alter ego of “Jeppe and Linda” from Atalaya-TNT Theatre (Spain)
at Kulturdivisionen Slagteriet

16 June h. 9.00 | INCITATUS
Jeppe will point a horse from Centaur Village as Minister, along with Deborah Hunt and Horseplay Everyday international workshop, at the City Hall Square

16 June at 17.00 | ON BOTH SIDES OF THE RIVER STORÅEN
The last action in a very long election campaign, with Jeppe, Linda and Alberto M. Guinaldo
at Wild Island

X-DAY
18 June h 13.00 | The big question will remain unanswered till the last moment: will Jeppe achieve to be elected as the new mayor of Holstebro? With students from Orchestra Efterskolen
Closing event of Holstebro Festival at Lystanlægget

SAMTALEKAFFE
Every month in Bomhuset – Museum for Kleinkunst, we will organise a “Coffee and talk” event with 10 different personalities invited by the organising committee to coffee (Eva Hallgren og Førstedamen) and to discuss together the monthly theme (Regional Policy, Health, Environment, Aesthetics, Family Politics)